A tough economy and an interest in healthy living combined to set Christopher Boyse on his functional food entrepreneurial adventure.

The founder of Brain Bar Nutrition Inc. was laid off a couple of years ago when corporate Calgary hit an economic speed bump. Armed with an MBA from the University of Toronto’s Rotman School of Management, he set out to find a venture he could develop and run himself.

The avid home cook, baker and convert to healthy living turned his attention to the snack food sector. 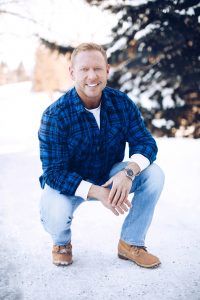 “I was very interested in the protein bar space but I didn’t want to make just another protein bar. I saw a gap in the market that functional foods were starting to fill,” says Boyse.

“At the same time, I was really getting interested in brain health. I realized there were some trends there. I thought maybe I would start experimenting with brain nutrients in my recipes and in my bars.”

So he embarked on creating Brain Bar in early 2017.

“I did a lot of homework on starting a food business in this province and jumping through all the regulatory and legal hoops. I hired a regulatory consultant to help me in navigating the regulatory landscape,” says Boyse.

Functional foods — foods or food components that have a potentially positive effect on health beyond basic nutrition, and foods for brain health specifically — are still a novel idea in Canada, he says.

“We didn’t want to make overt claims. If you create a product and you use safe, healthy ingredients that have certain known benefits then consumers will connect the dots,” says Boyse.

“Health Canada had questions about our name and logo and some of the imagery in our marketing. My position was it was about making smarter lifestyle choices; more mindful choices about what we eat. We never intended to make medical claims of any type.”

The product ticks off the clean eating and nutritional trend boxes that are becoming mainstream. For instance, Boyse chose to use pea protein isolate rather than the more commonly used whey protein. 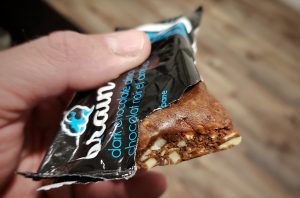 Boyse and his regulatory consultant worked with Health Canada on what ingredients would be considered acceptable in a brain-health bar.

He says some substances used in U.S. products hadn’t been tested here, but Health Canada has reviewed DHA, an Omega 3 fatty acid.

Boyse had been testing his bar and working on scaling it up toward commercial production at the Saskatchewan Food Industry Development Centre Inc. in Saskatoon. At the same time his bars were being tested, the centre was working with the small Saskatchewan firm Algarithm on the use of its Omega 3-rich algae oil in food products.

Algarithm is now Brain Bar’s supplier for the nutrient.

While Boyse is pleased he was able to find a supplier on the Prairies for that component of the bar, finding a supplier of pea-protein isolate has proven more difficult. He is currently using an offshore pea supplier.

“One reason I’m enjoying being involved in Plant Protein Association of Alberta events is because I would like to source that ingredient here on the Prairies. That’s part of our company philosophy and our brand. I think it’s a travesty to get these great ingredients elsewhere that we know we have here.”

Boyse says his company’s small size, limited supply requirements and his own lack of contacts appear to be the problem. Some of his other ingredient suppliers have waived their usual minimum shipment requirements to help him get off the ground.

The firm launched into the market in November 2018 with an initial run of 5,000 bars at the Saskatchewan Food Centre, selling them through a dozen smaller stores, online sales and marketing largely through social media. 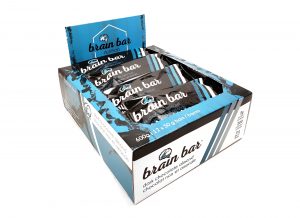 Boyse quickly received some big league expressions of interest. At Christmas, Yahoo featured Brain Bar in a food-gift feature. And then a major breakthrough occurred for the startup.

“After we launched in November I was approached by a major national grocery chain and they said ‘We saw your product on social media. Bring it into one of our Calgary stores and show it to the manager there.’ He took it to a buyer’s meeting for Western Canada and the next day I got the paper work and I just signed a listing agreement with them and got a vendor’s number,” says Boyse.

Now he is negotiating with a facility in Ontario to ramp up larger scale production of Brain Bars to meet the demand the grocery store contract will create.

Boyse says having that grocery chain contract and starting production at a larger facility should help him find a pea protein isolate supplier in Alberta.

So far Boyse has been a solopreneur, with a couple of silent partners, using a lean startup methodology to kickstart Brain Bar, outsourcing where he can and keeping overhead low. He says he does most of his work off a laptop and a cell phone.

“I have seven different suppliers I use. I have the regulatory consultant. I have a carton supplier, a wrapper supplier, and I had a design firm in Airdrie who designed my logo, branding and all my packaging.”

He had investigated doing his initial testing and pilot production at the Alberta government’s Leduc Food Processing Development Centre, but it is a nut-free facility so his bars, which include almonds, had to be produced at the similar Saskatchewan Food Centre.

“When it was coming down to our first production run I was just a traffic cop, directing traffic and working with all these people who are experts in their respective areas,” says Boyse.

He has no plans to build his own production facility even as the company grows because existing facilities and factories in Canada have excess capacities and they can take on small producers while still providing economies of scale on supplies like shipping cartons.

But Boyse stresses he wants the company Brain Bar to grow and provide jobs for Albertans.

Boyse says organizations like PPAA and Protein Industries Canada help create the connections that bring food companies like his together with ingredient manufacturers and other resources.

He feels Brain Bar is in a good position now for him to have conversations with bigger investors to push the company’s growth.

A year from now he would like to see Brain Bars in grocery stores across the country.

“There’s a trend and we can see it in the stores we’re visiting all the time. They’re repurposing their aisles for natural, better-for-you food products. The demand is already there. It’s just a matter of satisfying the demand.” 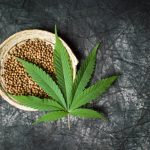