Custom-food manufacturer is ‘the kitchen behind the kitchen’

Custom-food manufacturer is ‘the kitchen behind the kitchen’

Mike Calverley rattles off more questions than average diners ever thought they could have about Caesar salad dressing. 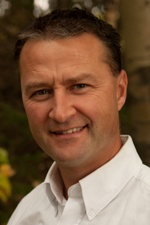 These are the kinds of considerations Calverley and his colleagues deal in at Kitchen Partners, a custom-food manufacturer on Edmonton’s south side. Calverley is the company’s vice-president of sales and marketing.

Kitchen Partners is in the “stirred-food” business, he says. It makes about 150 different products, all custom made and proprietary to its customers – mostly big-chain, fast-casual restaurants and prepared-food sections of various grocery stores.

That means soups, salad dressings, sauces, dips, fillings for stuffed peppers, bases for chicken pot pie – all made in the company’s four, 400-gallon kettles. Kitchen Partners ships almost daily and to every province in Canada, as well as to points north such as Whitehorse and Yellowknife.

“We are the kitchen behind their kitchen,” says Calverley. In fact, the company has strict confidentiality agreements with its customers.

“If you frequent those multi-unit chains, you’ve probably eaten our food – you just didn’t know it.”

Restaurant outsourcing hit the headlines in October 2019. A worker at an American bakery-café chain posted a video showing how she heated up a plastic pouch of macaroni and cheese and poured it into a bowl to serve. She lost her job and the video went viral.

The company was forced to defend the product – which it said was “made offsite with our proprietary recipe developed by our chefs” – to customers who might prefer to believe it was making cheese sauce from scratch and boiling pasta to order. 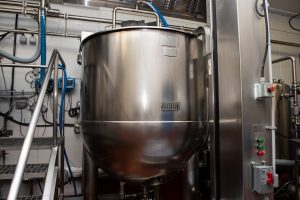 That’s just the kind of business Kitchen Partners is in. Its staff like to describe it as an extension of their customer’s kitchen, working closely with its customers to create food that looks and tastes like it’s made in house.

“The challenge with the restaurant industry is a lack of skilled labour and with minimum wage going up, it becomes inefficient to have someone in the back of the house making that barbecue sauce, making that dip,” Calverley says, adding consistency across chains is also essential.

“There’s still a lot of stuff done in the back of house, but it’s less than you’d think because the time is so precious.”

There’s also the issue of food storage and safety, which Calverly calls the “backbone” of product development.

“We have to take into account how restaurants are going to handle it.”

Marcin Barczak is one of four food scientists on Kitchen Partners’ staff of 85 employees. He has a master’s degree in food science and a bachelor’s degree in food engineering. In his line of work, food-safety considerations “become your primary job and you better be good at it. The rules are strict and we are religious about them.”

Barczak says processes like acidification, fermentation and reduction of available water to ensure food safety have been known for thousands of years. 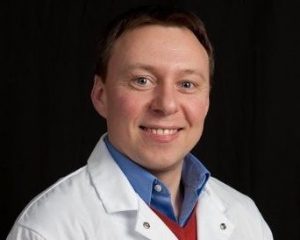 He’s also studied how to work with stabilizers and emulsifiers, skills that come in handy in Kitchen Partners’ stirred-food operation.

“It all starts with math – understanding the functionalities and properties of the ingredients that are being used.”

Though Barczak approaches food first as a scientist, he always has his mind on the taste and flavour of the end result, and on whether it’s what the customer wants.

When developing products, he considers characteristics like mouth feel, richness, creaminess and, in the case of salad dressing, “cling.”

“Salad dressing can nicely cling to the lettuce or, if it’s done slightly differently, it can run off the lettuce,” says Barczak.

One of the challenges of the operation is scaling up recipes – after they’ve been hand-whisked and tested in small batches – so that they still taste the same after coming out of the huge kettles, equipped with agitators.

“How can we upsize it into a 1,200-kilogram monstrosity?” says Barczak. “When it goes into a large kettle it might come out lumpy and we didn’t think about that before.”

Kitchen Partners is seeing an increased demand for vegan, vegetarian and plant-based options, something Barczak says the company has been doing for years, using grains, pulses and vegetables to make products.

“There are wonderful fats and oils that are not animal-based. We have had those things in our toolkit for many years.”

Barczak says the company is always trying new things and keeping an eye on trends. One of its latest projects? Mac and cheese in a pouch.

Eliza Barlow is a freelance writer who works for Taproot Edmonton, Avenue Edmonton, Legacy in Action, Journal of Commerce, techlife and New Trail. 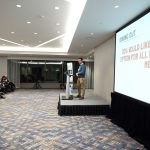 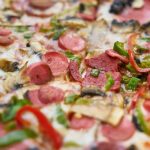