Pulses are moving into the pet food market as pet owners adopt the same food trends they follow for their companion animals, says researcher Lynne Weber.

“Much as human food trends are tending to go toward vegan or flexitarian, you will see more and more of pet foods moving in that direction because what owners eat, they want their pets to eat,” said Weber, professor of veterinary biomedical sciences at the University of Saskatchewan.

The shift into using pulses started with the gluten-free trend, and to replace wheat and other grains in premium dog food with ingredients such as peas, chickpeas and lentils, she told delegates at the recent Bridge2Food plant protein summit in Saskatoon.

“Although they’re using these pulses as starches, there’s protein that comes along with pulses.

Now that grain-free pet foods are well established for more than a decade, in general you can say that pet foods have already been moving toward increasing plant-protein use and inclusion — not as a full replacement (for meat) in all cases but definitely an inclusion.”

The latest trend has tripped all the way to vegan, said Weber. She said there are now vegan dog foods and even vegan cat foods available from specialty retailers.

Figures in 2011 show Canadians spent $1.7 billion on pet food and Weber estimated it has grown about 10 per cent every year since then. In the U.S., consumers spent $35 billion on dog food alone last year.

Weber said when she started pet food research 10 years ago, premium foods, such as the grain-free varieties, were not common but now they’re everywhere, including mass-market retailers like Walmart.

The transition to plant-based pet foods has not been without its challenges.

In July 2018 the FDA in the U.S. sent out a warning about grain-free dog food as a possible culprit in a heart condition that can kill dogs.

Weber is conducting research into the links. She said the FDA warning was based on a relatively small number of incidents but if there is a link, it could be a deficit in a chemical in the food called taurine, which is present in meat protein but not in plant-based protein.

It was thought dogs could synthesize taurine but two amino acids needed to produce the taurine may not be at high enough levels in some grain-free products.

“What’s the path forward? I think, just as with cats, we’re going to have to add taurine to plant-protein-based dog foods.”

Companion animals aren’t the only non-human market for plant protein.

Dairy cows in California are fed canola meal from the Canadian prairies, and research is underway to breed canola with protein that is accessible for the digestive tracks of swine and poultry.

Calgary-based Botaneco is working on innovations which would open up aquaculture, particularly salmon and shrimp farming, to the canola protein market.

Dzisiak said in an interview that the aquaculture market is an underserved protein market.

“The demand is expanding but the supply of protein, fish meal primarily, is really fixed and so the cost of fish meal is increasing,” Dzisiak said.

“Some species, like salmon and shrimp, are very particular in what they eat. They’re kind of on an Atkins diet, so they’re on a high-fat, very high-protein diet.”

Canola has the potential to replace fish meal as the protein source, he said.

“It has the right kind of amino acid profile and it doesn’t have some of the ill effects that soy protein has. The problem is no one can make it and we believe we’ve got the process that can make it in large volume.”

“(Conventional) canola meal only has about 36 per cent protein and the canola concentrate we make would be over 70 per cent.”

At the end of June Botaneco, along with partners Corteva and Rowland Farms, received the first investment from PIC for further commercialization of its processing technology for introducing new protein ingredients into the global food, feed and aquaculture markets. 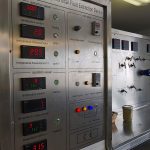