Sophia Tang is obsessed with food waste. As an immigrant to Canada from Hong Kong as a child, she grew up understanding that food was not to be taken for granted.

“My family instilled in me that I had to finish every single grain of rice in my bowl,” says Tang, 38, founder and CEO of Calgary’s coRISE, an innovative food upcycling company.

She elaborates with a chuckle: “My grandparents used to tell me that every rice grain in my bowl equalled a pimple on the face of my future husband.” 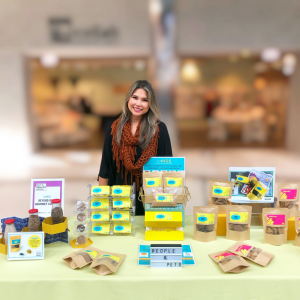 Little wonder that Tang’s job today involves figuring out how to stop wasting food. Indeed, she has turned the lessons of her childhood into a company that focuses on how to take the protein-rich barley that’s left over from beer production and turn it into foods that are not only delicious, but good for you.

By drying and milling the leftover barley—known as spent grain—coRISE has created a line of cookies, granola and crackers, plus pancake and brownie mixes, that are rich in protein and dietary fibre. But spent grain, which also contains essential amino acids, minerals, polyphenols, vitamins and lipids, is more than a nutritious ingredient in Tang’s mind.

“My company is a social enterprise and for me, it’s always impact first instead of profit first,” she explains. “I want to make an impact by reducing food waste and giving back to the community.”

With the rapid rise of craft brewing, spent grain production is growing too. The combination of big and small brewing companies across Alberta creates thousands of tonnes daily of spent grain. Some of that food waste, which makes up about 85 per cent of brewing byproducts, can be used as compost or by farmers as feed for livestock. But much of it ends up in landfill.

CoRISE gets some of its spent grain from a few craft breweries in Calgary, including Cold Garden Beverage Company. But its biggest spent grain supplier is Edmonton’s Alley Kat Brewing Company. In the past year, coRISE has turned about 2,700 pounds of spent grain into its food products.

Brewery makes good use of its spent grain 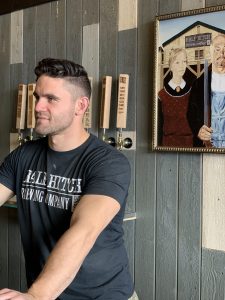 At Cochrane’s Half Hitch Brewing—a family-owned and -operated brewery since 2016—co-founder and CEO Kyle Heier says a metric tonne of spent grain is produced every time they brew a batch of beer, which happens two or three times a week.

“Usually, we give (the spent grain) away to farmers because we didn’t want it to go to landfill and we knew it had significant nutritional value,” says Heier. “But as far as a business model goes, we didn’t have much of an application for it.”

But while brainstorming with his dad (also a brewery co-founder), Heier began to think about the compelling combination of beer and pizza. An on-site restaurant at Half Hitch Brewery was already operating, and staff had been experimenting with dishes made with spent grain. Heier decided to incorporate the ingredient into pizza dough.

Three years later, Half Hitch owns two pizza parlours called The Mash, one in Airdrie and another in Calgary’s Kensington neighbourhood. Both restaurants opened during the pandemic and have been busy ever since, with a third location planned for Calgary’s Mahogany district.

The spent grain for the pizza dough comes from Half Hitch’s Papa Bear brew, made from Prairie barley, wheat, rye and oats. 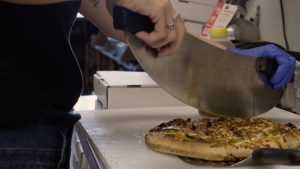 Heier says it adds a little texture to the dough and also a touch of sweetness. While the product does contain gluten, some customers with food intolerances tell Heier they can eat pizza from The Mash without dietary difficulties.

About one and a half cups of spent grain (which is high in protein) goes into every batch of pizza dough and makes about 24 10-inch pizzas. Heier has sent samples of his spent grain for testing at a food lab and hopes to soon have a better sense of the nutritional properties of the resulting dough.

“From a marketing standpoint, we knew (the spent grain) would have a neat alteration on the end product,” says Heier. “But the big story here is how you recycle the grain as opposed to throwing it out. Whether by giving it to livestock or food production, the serendipitous side is that it produces a really good product.”

Sophia Tang is also pleased with the products she creates in a Calgary commercial kitchen for coRISE. (The company name comes from its core belief—that through “community collaboration, we all rise together.”)

Her cookies, akin to a Scottish shortbread or tea biscuit, come in a variety of flavours, from vanilla stout to chocolately porter. The treats, which can be found at Blush Lane locations in Edmonton and Calgary, were recently named a 2020 runner-up in the prestigious Made in Alberta competition. 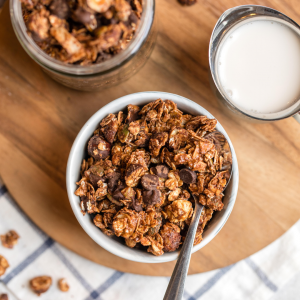 At this point, Tang is working alone in her fledgling business, which has been operating for little more than a year. But she sees endless potential for the use of spent grain and is a passionate believer in the benefits of upcycling, or creating new products from those that might otherwise have been discarded.

Tang is working with the Food Processing Development Centre in Leduc, to find more efficient ways to use spent grain and to develop different dehydration methods to make products more shelf-stable.

“Spent grain is the perfect ingredient for someone who wants a high-protein, high-fibre source that’s locally grown,” she says.

Tang’s passion can be seen in her commitment to this social enterprise. Yes, coRISE creates a key ingredient—dehydrated, milled spent grain—for a variety of plant-based products. But it’s bigger than that.

Tang also strongly believes that the healthful properties of spent grain can help create a positive connection between body and mind.

“What we eat affects our mood as well,” says Tang, who supports mental health programs such as pet companionship through coRISE (which also makes dog treats.)

As one of only two Canadian members of the international Upcycled Food Association, Tang’s goal is to help people become as familiar with the word “upcycled” as they are with the word “organic.”

“I want to educate people that upcycled tastes freakin’ delicious.”