Working together to grow a southern food corridor

Working together to grow a southern food corridor

When Protein Industries Canada CEO Bill Greuel and his team were in Lethbridge for meetings in early May, they were treated to a bus tour of a newly inaugurated region dubbing itself Canada’s Premier Food Corridor.

And when delegates from around the world descend on Alberta for the international Bridge2Food summit in June, they will have an opportunity to take a similar tour, allowing the visitors to see some of the 65-plus crop varieties grown on 4.2 million acres of excellent agricultural land, a food-processing hub second to none in Canada and a strong research-and-development sector focused on agri-business. 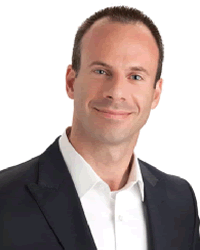 Canada’s Premier Food Corridor is made up of five communities along Highway 3 in southern Alberta, including the City of Lethbridge, the towns of Taber and Coaldale, Lethbridge County and the Municipal District of Taber.

“We believe there is strength in numbers,” says Trevor Lewington, CEO of Economic Development Lethbridge and vice-chair of the board of Plant Protein Alliance of Alberta (PPAA).

“Marketing a region has much more appeal on a national and international level than marketing our communities individually. And I include Lethbridge in that. Even though Lethbridge is a city of 100,000, on a global scale, that’s actually a very small city.”

The impetus for working collectively as Canada’s Premier Food Corridor began about six months ago when the municipalities started preparing for the Bridge2Food summits (one in Saskatoon and another in Calgary) and events being organized this summer by Protein Industries Canada, the federally funded supercluster working to position western Canada as a global source of high-quality plant protein products. “That’s when the conversations started about working collectively,” says Lewington.

There are almost 3,100 farms in the corridor and increasing interest in growing and processing protein-based crops to take advantage of the exploding world market.

Martin Ebel, economic development officer with the County of Lethbridge, believes processing of plant-based proteins “is going to be huge. Medicine, cosmetics, food. With all the benefits and potential spinoffs, it’s a very exciting time. How often do you get to be at the very beginning of something like this?” 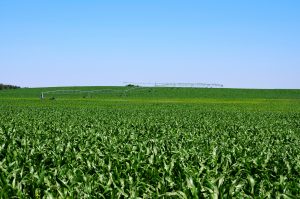 Many protein crops are already being grown in the corridor. A good chunk of Alberta’s pulse crops are grown there, including yellow peas, fava beans and other types of beans. Farmers in the Municipal District of Taber are growing a lot of hemp.

The plant-processing industry is strong in the corridor as well. Viterra Inc. has a bean processing and packaging plant east of Taber. Sakai Spice, based in Lethbridge, is exporting mustard seed and wasabi powder to Japan. Richardson Oilseed has just completed a $120-million expansion of its canola oil crushing operation.

R&D is another strength of this southern Alberta region. University of Lethbridge and Lethbridge College both offer agri-business programs (including collaborative courses) and do a lot of applied and basic research in the agricultural sector.  The federally run Lethbridge Research and Development Centre is also doing ground-breaking crop research.

Western Economic Diversification Canada compiled an asset map of the Lethbridge-Taber agri-food corridor that demonstrates just how wide-ranging and diverse the area is, including farms, industry, education and associations. 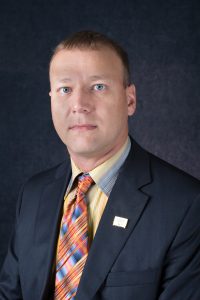 Agriculture has always been the foundation of the region, which has never had as strong an oil-and-gas presence as the province’s north. Sixty per cent of Canada’s cattle industry is found in the area north of Lethbridge. Even beef producers are exploring the burgeoning plant protein opportunities, says Lewington.

“The animal protein guys want to know where the market is going and also want to improve the quality of the livestock feed for their animals,” he explains. “We sometimes forget that plant proteins are as important for livestock as for human consumption. If we can improve the nutritionals of plant proteins, we can do that not only for ourselves but for livestock and that improves the quality of the beef for export.”

The municipalities, producers and research institutions in Canada’s Premier Food Corridor understand the importance of collaboration. “One area where the region is well-positioned is in its history of co-operation and collaboration,” says Ebel. “We’ve been doing it for decades. To make this happen, we have to be able to play together and we have proven that we can.”

Ben Young, economic development officer for the Town of Taber, also talks about the strength of working together.

“To be engaged globally, we definitely need to partner. Our past successes demonstrate our capabilities. There’s no doubt we can produce. We just need to make our potential known.” 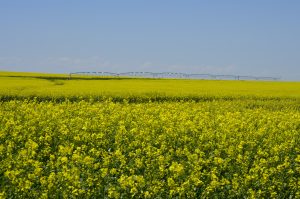 The southern Alberta corridor also has other agricultural advantages, including great transportation links (highways and rail), an extraordinary number of sunny days (320 days of sunshine per year) and a strong irrigation infrastructure that results in healthier soil, less disease and better yields.

Lewington hopes delegates to Bridge2Food will get to see all these advantages first-hand if they sign up for the planned one-day corridor tour on Saturday, June 1, in between the first stage of Bridge2Food in Saskatoon (May 29-31) and the concluding stage in Calgary (June 3-5).

The bus tour will take a farm-to-fork approach, showcasing farms, researchers and processors in the region, and ending the day with a long-table dinner featuring all southern Alberta products.

“So for our European friends, they can experience all locally grown foods and see the quality for themselves,” says Lewington. “We’ll show them the field where it was grown, take them through a plant where some of it was processed and then finish up the day with perhaps a barley-based beverage and food that was produced locally.”

Anyone interested in taking the tour can find more information on this Bridge2Food page or they can contact Peter Casurella (executive director of SouthGrow) at Peter.Casurella@southgrow.com or by calling him at 1-403-394-0615.